We’d like to wish you all the very best for 2017 and look forward to a brand new year of delivering excellent gardening services.

Just quickly whilst I’m walking Angus… the new Eds Jobs system is great- so much easier to update jobs on the go now. Plus there’s a new mast up near home now so I can easily get  3G whilst in ‘the sticks’. Just need to remember to keep one eye on him whilst he charges around the huge fields and woods here chasing hares, pheasants, etc!

Ed’s Operator, Stuart, who covers the Fakenham area in Norfolk, sent in this photograph of his dog Angus.   They had just been for a lovely stormy walk on the beach and Angus is shown here keeping warm in the van!

Stuart Thackeray came on board to run an Ed’s business in the spring of 2014. Let’s hear what Stuart has to say about his first year with Ed’s.

“Before I joined Ed’s I had an established career in London and outwardly I guess my life looked very successful. The reality was I was bored with the rat race commute, no longer inspired by my job and felt that my work-life balance made it hard for me to pursue my interests as much as I would have liked.
“To be honest I felt that I was living what was perceived to be a “successful” life but true success is measured by being at one with yourself and happy and in that aspect my career was severely lacking. I’ve got a strong business background so I knew up front what the important factors were when starting up your own business.
“I had my checklist and of all the options I looked at, joining Ed’s was the one that came out on top. I’ve had conversations with friends who questioned my reasons for wanting to be part of a franchise operation when I already had experience of running a business. The answer is simple – it was nothing to do with lacking confidence but all about the realisation that there was no way that I could develop such a strong sales, marketing and technical support engine as I am getting for the level of investment required to join Ed’s.
“Well, here we are one year on and life is very good. Encouraged by my success in setting up an Ed’s business in New Malden, Surrey during my first year I took the decision to complete the change in lifestyle and move to the country.
“I never thought I would have the confidence for such a bold move given I was still in my first year of trading, but I’d always wanted to return to the county I was brought up in and live the rural dream with all it’s clichés. However, by following the Ed’s business model, my business was developing so well, I was 100% sure I could still make it work for me in rural Norfolk rather than the heavily populated suburbs of Surrey.
“So now, instead of a journey to work on the packed 07:30 train into London Waterloo, my commute, in my Ed’s van winds its way along quiet picture postcard country lanes with me at the wheel and Angus, my working black Labrador sidekick, keeping me company.
“I don’t want to make it all sound perfect, obviously work always has its challenges and starting a business takes a lot of dedication and very hard work. My customers are generally lovely although you always get the odd one who does not value the services I offer. It is real life after all.

“What I can truthfully say though is that a bad day gardening for me is always ten times better than a bad day at the office. Freedom and the knowledge that I am running my own show but with a successful business backing me gives me peace of mind and a sense of wellbeing. Birdsong, big skies, the sun on my back and feeling fitter than I have done in years are added bonuses!
“Would I join Ed’s again, knowing what I know now? Yes, without a moment’s hesitation! In fact, one of our operators has just joined Ed’s for a second time – Lucy sold her successful Ed’s business due to a lifestyle move abroad and, having decided to move back to the UK a couple of years later, she’s joined Ed’s again. I think that says it all, who would do that if Ed’s wasn’t what it professed to be?”

Ed’s Garden Maintenance Operators Mark (Bournemouth) and Nigel (Worthing) were out training last week at Sparsholt College, Hampshire.   They were taking a course to gain their PA1 and PA6 Spraying Licenses.    Mark said “The course went well, we have both passed PA1 and now take our PA6 exam next week” – we wish them good luck. 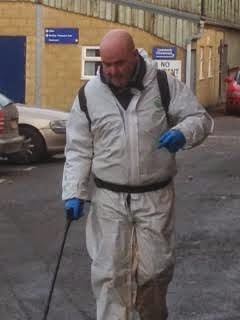 Ed’s franchisee John Marshall has successfully split his business generating a capital sum that exceeds his original franchise investment.  John who started an Ed’s franchise in the Chobham area only three years ago has developed a large enough customer base to enable him to sell half of these generating a significant lump sum whilst retaining his franchise.
John said, “I found myself in a dilemma in that my kids have now fled the nest and my wife and I want to move away from London. I have created a strong gardening business and want to build another one with Ed’s. Being part of Ed’s is unusual in that I am able to split my protected area and capitalise on all the customer goodwill I have generated over the last three years and carry on where I want to live. I have sold half my area for more than I paid when I initially started. Where do you get that kind of flexibility in a business venture?”
“It’s all about creating a win-win scenario for all parties involved” says Ed Mauleverer, founder of Ed’s Garden Maintenance. “What we really want is a thriving network of happy operators and happy customers. John has received a payment greater than his initial investment and can rebuild his Ed’s business where he wants to live. The customer is happy because they are still going to get a good service from Andy who understands Ed’s core values about being prompt reliable and efficient and Ed’s has gained a new franchisee. I think we’re pretty unusual being able to offer this.”
Releasing a percentage of his customer base keeps John under the VAT threshold, and in freeing up some of his time he will be able to take a strategic approach to growing the business again.  Whilst people may think it’s better to have a large territory the Ed’s business model works on developing an area of customers that is as concentrated as possible. This reduces travel time between jobs and increases the number of gardens that can be maintained in a day.  The perfect scenario is to arrive at one end of a residential road and simply move from garden to garden to the other end of the same street; a scenario that many Ed’s operators have created.
“By paying a little more than I would for a new franchise” says Andy who has just purchased John’s regular customers “I can really hit the ground running with a strong customer base in place from Day One. I know that I’ll have a very healthy revenue stream that will accelerate my goals of growing the business to the next level. The lifestyle is a lot more attractive than my previous one too. My decision was a total no brainer.”

We had our best ever turnout at our training event earlier in the week at RHS Wisley; always beautiful, the grounds looked particularly stunning with the autumnal colours.  Led by one of Wisley’s horticulture experts our operators had the chance to get their questions answered and expand their knowledge.
Our expert Ray discussed treating and disposing of weeds including  ground elder and the invasive giant hogweed and Japanese Knotweed which can grow through tarmac and even concrete.We also learned more about the nuances of tree preservation orders and liability.  Whilst many of us understand that trees are protected within conservation areas what is less well known is that block preservation orders may exist where the tree skyline is being protected.
The eruption of fairy rings, toadstools are not uncommon as this time of year and we discussed the safe treatment of these fungi that pop up overnight in this damp weather. Ray shared his in-depth knowledge about trimming hedges and the legislation that surrounds the protection of nesting birds, followed by guidance on identifying pests that damage plants and how and when best to treat them.
The morning was rounded off with the opportunity to share experiences with one another;  something everyone always enjoys. The feedback from this highly informative session was extremely positive; We work hard to continue to shape these events so that everyone gets the most out of them.  Our thanks go to Tessa for organising such a brilliant training.

Operator Guy Lilford of the Bracknell and Maidenhead
areas appeared in the Daily Mail recently to discuss his success of buying an Ed’s Franchise. With the business
and marketing help of Ed’s along with Guy’s hard work, Guy’s business flourished. Due to the success
of his business, Guy is now looking at selling a section
of his franchise in order to concentrate on a smaller area. Buying a section of an existing franchise means immediate work and an immediate client base for those
looking to start in the gardening industry.

Ed’s Garden Maintenance Operator Matthew May is through as a finalist in the HSBC Franchisee of the Year Awards which are supported by Express Newspapers.  The winner is to be announced on October 2nd.

The judges really enjoyed hearing about his relationships with some of his customers.  Please contact Ed’s Garden Maintenance for more information.